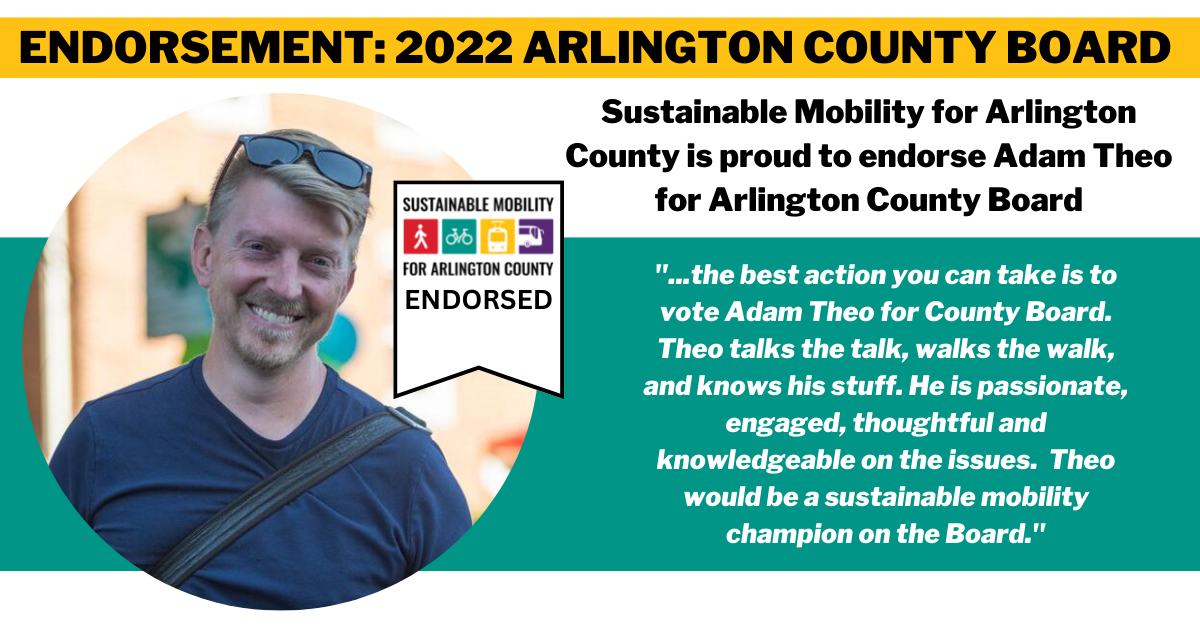 Level of Effort: Choose Your Own Adventure
Deadline: Tue 11/8 7pm

We require candidates to fill out our questionnaire to be considered for an endorsement. Following their submissions, our Board of Directors examines the candidates’ questionnaire answers, public statements, and actions, and makes an endorsement decision that they believe will advance Sustainable Mobility for Arlington County’s policy goals.

Why Theo?
Theo’s policy stances throughout the questionnaire are a cut above the rest, with the exception of the Master Transportation Plan question. His answer on street space trade-offs is not just good on the content (support for trails, transit & protected bike lanes, a clear comfort with narrowing lanes, road diets and “even” removal of on-street parking), it also features excellent framing - a trait we very much like to see. Our elected officials need to not just implement good transportation policies, they need to be able to explain them in an effective way when questioned.

Our favorite part of his trails answer is its specificity, committing not just to “modernization” but calling out the specific items that will need to be addressed - dangerous turns, potholes, lighting, and de-icing during the winter. He also shows a strong understanding of the deep-seated problems in this area by calling out this shift from trails as “recreation” to trails as “transportation” and highlighting the difficulties we have seen trying to treat trails as transportation when they are controlled by the Parks Department, which prioritizes recreation.

Theo’s transit answer highlights his desire to make our public transit good enough to replace many school bus trips (an approach we heartily endorse as both improving mobility for all and being very cost-effective), as well as a clear recognition that bus service’s greatest sustainability benefits are in replacing car trips, not in converting to battery-electric buses, which may not yet be ready to run a full day’s service on Arlington’s hilly streets. While creating a “transportation utility” funded by user fees instead of property taxes would likely be an uphill battle in the Virginia General Assembly, we appreciate the out-of-the-box thinking and understanding of the current funding challenges facing our transportation system.

The Master Transportation Plan (MTP) question is Theo’s thinnest and clear area for improvement. In his focus on the process, he misses out on a chance to actually articulate a vision for what those policies can and should be. Arlington’s planning documents are the framework to which we constantly refer back and a re-write of the MTP can give us a strong skeleton upon which to build our future transportation network. The danger here, is that without strong leadership from our elected officials, the County may embark on a limited scope “update” rather than a re-write. In doing so we would miss out on a major opportunity to lay out some “big ideas” (what project or projects are going to really move the needle for mobility in Arlington in the next 30 years) as well as integrating our transportation. Our current MTP was written one mode at a time (a pedestrian element, a bike element, a streets element, a transit element) and as a result, there is little useful guidance on bringing them all together or in making decisions between those modes when space is at a premium.

In addition to his questionnaire answers, we are ecstatic to see that Theo has made sustainable mobility a core pillar of his campaign. A quick perusal through his campaign website and social media shows street safety and sustainability featured heavily in both, as well as on his grip card. While he has no voting record to examine as a County Board Member (having not yet served as one) we have seen his support for sustainable mobility as an elected officer in the Ballston-Virginia Square Civic Association where he spoke up strongly in support of our Safe, Sustainable Fairfax Drive campaign. Often in Arlington politics, the choice between candidates is not between pro and against, it is between a candidate who is “supportive” vs one who is a clear champion. We believe Theo will be a clear champion of street safety and sustainable mobility and is most deserving of your vote on November 8th.

Where De Ferranti Fell Short
De Ferranti has been a supportive elected official, generally going along with most of the projects and initiatives brought forward by staff, including many pushed by Sustainable Mobility for Arlington County. However, de Ferranti could do more to effectively champion sustainable mobility issues both publicly and behind the scenes. His responses to our questionnaire similarly showed a level of support for sustainable transportation but that he has a ways to go a champion.

Some of de Ferranti’s answers to our questionnaire were very promising: His answer on e-bikes is very strong, particularly his support for e-bike parking with charging and his readiness to “personally engage in this mode of transportation”. His answer on the Master Transportation Plan (MTP) question is excellent, with a focus on needing to rewrite the plan, have better leadership at DES, and be data-driven. We agree with de Ferranti’s clear future vision for the MTP and his push to infuse Vision Zero throughout.

De Ferranti’s answer on transit is strong, in recognizing the shift from peak commuting times to all-day trip demand and the need to address ART reliability. We appreciate his noting “our future will depend partly on moving easily via non-work trips,” and his support of students having free fares on ART. However, we hope to see an outline of a plan of how to get to that future and more support for adjusting ART routes and schedules to better serve APS student transportation. Additionally, his work on the Board to push battery-electric buses, even when staff is confident that current models cannot complete a full day of service in Arlington without charging, gives us pause.

De Ferranti’s other answers lacked specificity. He supports “the relocation [sic] of existing street space” but would want to “consider the data” to “determine how to reach the best result.” Without information on what data he would consider, how he would weigh that data, or what he would consider the “best result,” this answer sounds good, but says little at the end of the day. We do appreciate his introduction of “urgency” to the conversation on Carlin Springs Road.

Similarly, his trails answer is good but lacks specificity. He supports “modernizing” (admittedly, our term) but without committing to specifics of that modernization (which we also laid out - fixing dangerous hairpin turns, adding adequate lighting, etc). We appreciate his noting the “challenges of pedestrians and bikes co-located in numerous locations,” but hope to see a stance for more specific solutions, like separating people walking and biking.

While his answers are supportive and his actions on the board can also be considered supportive, it is clear that Sustainable Mobility issues are not a priority for him. They are not featured on the “priorities” section of his campaign website, he does not regularly raise them at campaign events, and getting him to push staff for answers or changes or to bring his colleagues around to a majority position on a sustainable mobility issue has been challenging while he’s been in office.

All of our interactions with de Ferranti, however, have shown him to be someone who knows he can do better on mobility issues and freely admits they have not been his priorities so far while in office. We know de Ferranti is a man of integrity and trust he will continue to be a supporter and partner if re-elected. Few people are single-issue voters; if you feel drawn to vote for de Ferranti based on other of your values that he shares, know that his re-election would not create a stumbling block for sustainable mobility.

The Trouble with Clement
Where do we begin? Clement’s answers were universally disappointing. On the few areas she seemed supportive of sustainable transportation, she went on to contradict her position in later answers.

Clement states that the need to “prioritize speedy transit, a viable bike network and safe sidewalks and trails is a given” and yet cannot imagine a way to implement them on priority corridors like George Mason Drive, declaring them “infeasible” (presumably because space would have to be reallocated away from cars).

On trails, Clement declares that she supports “improvements to all of Arlington’s bike trails,” but then argues against the improvement that actually has a plan to move forward at this time, the W&OD Dual Trails project. Without any data and contrary to basic logic, Clement blames the July 2019 flooding event on the W&OD trail, absolving the acres and acres of impervious surface added to the watershed since the trail’s construction. She ignores the data showing that the stormwater infrastructure that was installed with the existing dual trail segment in Falls Church has decreased runoff from the trail. Clement advocates for greater use of the Four Mile Run Trail - a trail that is hilly, uncomfortably narrow, and falling apart - as an alternative to the W&OD Trail, a plan, which would require more environmental disturbance to achieve an inferior trail experience. Finally, in her answer on e-bikes, she reveals her bias that trails are primarily used for recreation, a belief that undercuts the opportunity to expand sustainable transportation throughout Arlington.

One point of Clement’s we can agree with: the Master Transportation Plan should be easier for the public to understand. However, Clement did not elaborate what she would support to see in a more concise MTP.

On transit, Clement does well in identifying one problem - underuse of ART buses - but we do not think her proposed solution - an advertising campaign - is likely to address the issue. Like de Ferranti, Clement lauds the move to battery-electric buses without grappling with their existing deficiencies, which would impact reliability, frequency, and availability of service for ART. Her answer ignores the primary climate change-fighting super power of transit: replacing car trips. Also like de Ferranti, we appreciate Clement’s support of students having free fares on ART, but are disappointed not to see support for adjusting ART routes and schedules to better serve APS student transportation.

Finally, her anti-ebike position, based on a questionable anecdote that is unsupported by the County’s own Vision Zero crash data, is not only ableist, it cuts against the development with great promise for replacing the car for most trips within Arlington County. A vote for Clement is not a vote for sustainable mobility.

In Conclusion
In this County Board Election, we believe the best action you can take is to vote Adam Theo for County Board. Theo talks the talk, walks the walk, and knows his stuff. He is passionate, engaged, thoughtful and knowledgeable on the issues. Theo would be a sustainable mobility champion on the Board.

Most importantly, make a plan to vote! You can vote by mail (request your ballot soon!), at in-person early voting, or at your normal voting precinct on November 8th between 6am and 7pm.